What are Ephemeral Environments and their impact on DevOps and QA

Understanding what ephemeral environments are and how they ensure QA and DevOps bottlenecks are solved for. 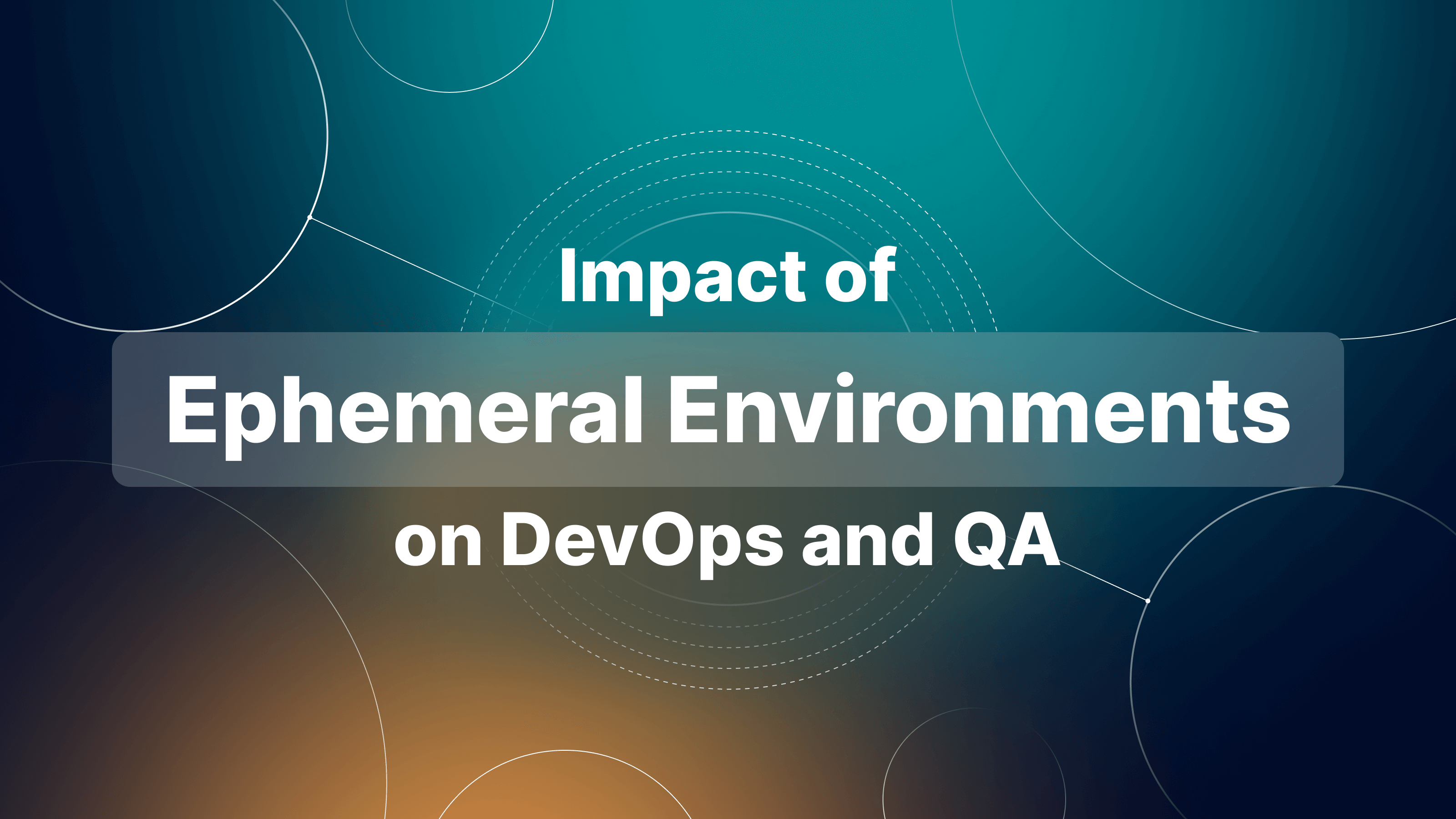 ‍What are the bottlenecks of QA and DevOps

Software breaks when code is moved between environments due to the variations in configurations between each environment. Companies waste days and sometimes weeks resolving issues that are not the result of coding flaws but rather are caused by environmental problems. Environments with inconsistent conditions are the main enemy of agility.

The manual intervention leads to human error and non-repeatable processes. Testing and deployments are the two processes where manual intervention can have the most significant impact on agility. It is impossible to conduct continuous integration and continuous delivery agilely if testing is done manually. Additionally, manual testing raises the potential for flaws to appear, leading to an unanticipated effort.

Before pushing any code into production, organisations generally merge and test it in a staging or QA environment. They only have one or a small number of these environments, which causes a bottleneck that slows the development cycle as the organisation expands.

What is an Ephemeral Environment?

Ephemeral environments are becoming more popular because they can take the place of or shorten the duration of staging environments, considerably lowering development expenses. Ephemeral habitats are those that are designed to last only briefly. They could, for instance, last a few weeks or be as brief as the lifecycle of a CI/CD pipeline (the length of a sprint).

The concept of ephemeral settings is to be produced, used for a brief time, and discarded, regardless of how long they last. They are sometimes referred to as “on-demand environments,” “dynamic environments,” “temporary environments,” or “sandbox environments.” It indicates your application contains all of your services and the code and is independent. It has a state and all these incredibly crucial elements that you must pay attention to.

Ephemeral environments are short-term deployments that typically comprise a self-contained version of your application for each feature branch. When using hosted DevOps platforms like webapp.io or Heroku, they are frequently spun up by a Slack bot or automatically after every commit.
‍

Why is an Ephemeral Environment needed?
‍

‍
Automatically configure and map application architecture to enable the development and testing of various services in a real-world setting. This has to be completely independent of cloud and technology stacks, including Kubernetes and other settings. With complete access to data and dependencies from other parties, the platform must be able to operate on several apps concurrently without interfering with others.

To ensure that ephemeral environments are constantly in sync with what is in production, the platform must automatically set up and update any changes to the mapping of the production infrastructure in real time. The platform will assure the appropriate environment replicating production without waiting, saving time on configuration checks.
‍

‍Test environments will as nearly resemble working in production as feasible since the platform must load the pertinent data and third-party resources that are essential components of the environment to test, operate, and debug against.‍

‍For other stakeholders to have insight into and a chance to work together for quicker feedback cycles, the platform must have the ability to share ephemeral test environments. This is crucial for working together on debugging.

Ephemeral environments should resemble the production environment as closely as possible because they are primarily used for testing. Otherwise, since the conditions are different between a test and production, it would be nearly difficult to predict whether a test would fail (and this kind of defeats the purpose of testing).

If testing is their primary function, they perform at their best when users can collect input from many sources and stakeholders, including developers, QAs, product managers, and even consumers.

Collaboration on the code review may be facilitated more easily in preview settings. The sense of ownership rises when QA, product managers, and engineers participate in the review procedure. When cross-functional team members’ comments are included in the code review process without waiting for DevOps to build up and spin up appropriate environments, it also results in their autonomy.

You may conduct quicker feedback cycles using ephemeral environments, which will shorten the time it takes to sell the product. The ability to distribute hotfixes without overriding the staging build is invaluable for a product already in use. The next edition of your product may now be released considerably more quickly. Remember that you can include the modifications in the same pull request before the merging takes place. Therefore, you do not need to wait for a merge to view the changes. This dramatically enhances the release cycles.

Benefits of Ephemeral Environments in the Dev Cycle

One may decrease rework and increase development velocity by identifying quality concerns earlier in the development cycle. Ephemeral settings encourage participation from all stakeholders in the development process, which reduces the need for rework. For instance, instead of waiting until a developer has finished coding before seeing changes, QAs, designers, product managers, or even consumers may provide input as the feature is being developed.

The Continuous Integration (CI) methodology emphasises the need to continually test your code as it is sent to the server. The issue is that most continuous integration (CI) systems only run unit tests, which only test individual pieces of code rather than the entire system. Integration and smoke tests, which test the system as a whole, are typically delayed until after the code has been merged to the main branch in the staging environment. At that point, it’s already too late to rectify any problems; you’ll need to start over. Additionally, if there is just one staging environment accessible, bottlenecks will result. Integrity and smoke tests may be run immediately after the environment is built using ephemeral environments, guaranteeing that they are run as frequently as unit tests and helping you identify problems early in the development process.

Allowing for infrastructure experimentation is important since changing the infrastructure can reduce your team’s velocity and is expensive in terms of both time and money. Ephemeral environments enable developers to test new technology in isolation without interfering with other developers’ work.

While many firms now use Agile / Scrum methodologies, their technology and infrastructure aren’t necessarily ready for iterative software development. Ephemeral settings are the ideal instrument to enable the early and frequent feedback on which these procedures place a strong emphasis.

Collaboration between manual testers, automation testers, developers, and other stakeholders is greatly enhanced by ephemeral environments. This improves the evaluation procedure, leading to higher-quality products. The product team is free to test novel concepts and experiments in isolated preview settings.

The ephemeral environments’ transitory nature means they are eliminated once the PR is merged back into the main branch. As a result, costs are decreased because permanent infrastructure is no longer needed. A full-fledged deployment environment’s automatic provisioning and de-provisioning cut down on time required to set up the environments manually. Keep in mind that each preview setting differs from the others. Whether you provide the environment manually or automatically, there will be a noticeable difference in the configuration, security, infrastructure, database, etc. Because the DevOps team puts in less work than it does in terms of time, you’ll pay less for their services overall.

The software development lifecycle is accelerated, which is the most popular argument for using an ephemeral environment approach. Instead of only providing input on the code modification itself, developers may visually inspect the effects of changes. Additionally, developers can share their work with non-technical collaborators such as designers as easily as by sharing a link to the proposed revision.

Test environments are a significant bottleneck for DevOps testing, which is on the rise. A new DevOps test environment management platform is required to eliminate the bottlenecks. There is a need for on-demand test environments so that programmers and testers don’t have to wait for a shared test environment. Through thorough and automated testing, such a system would increase agility, lessen inefficient orchestration bottlenecks, enhance quality and risk management, and enable continuous development by offering more insightful insights and feedback. Our findings confirmed that using remote development environments is a fantastic method to boost developer output. More significantly, managing these high-value investments may be done sustainably and economically by using paradigms for ephemeral infrastructure.