Learn an over on what a pipeline in DevOps is, ranging from how to implement to best practices! 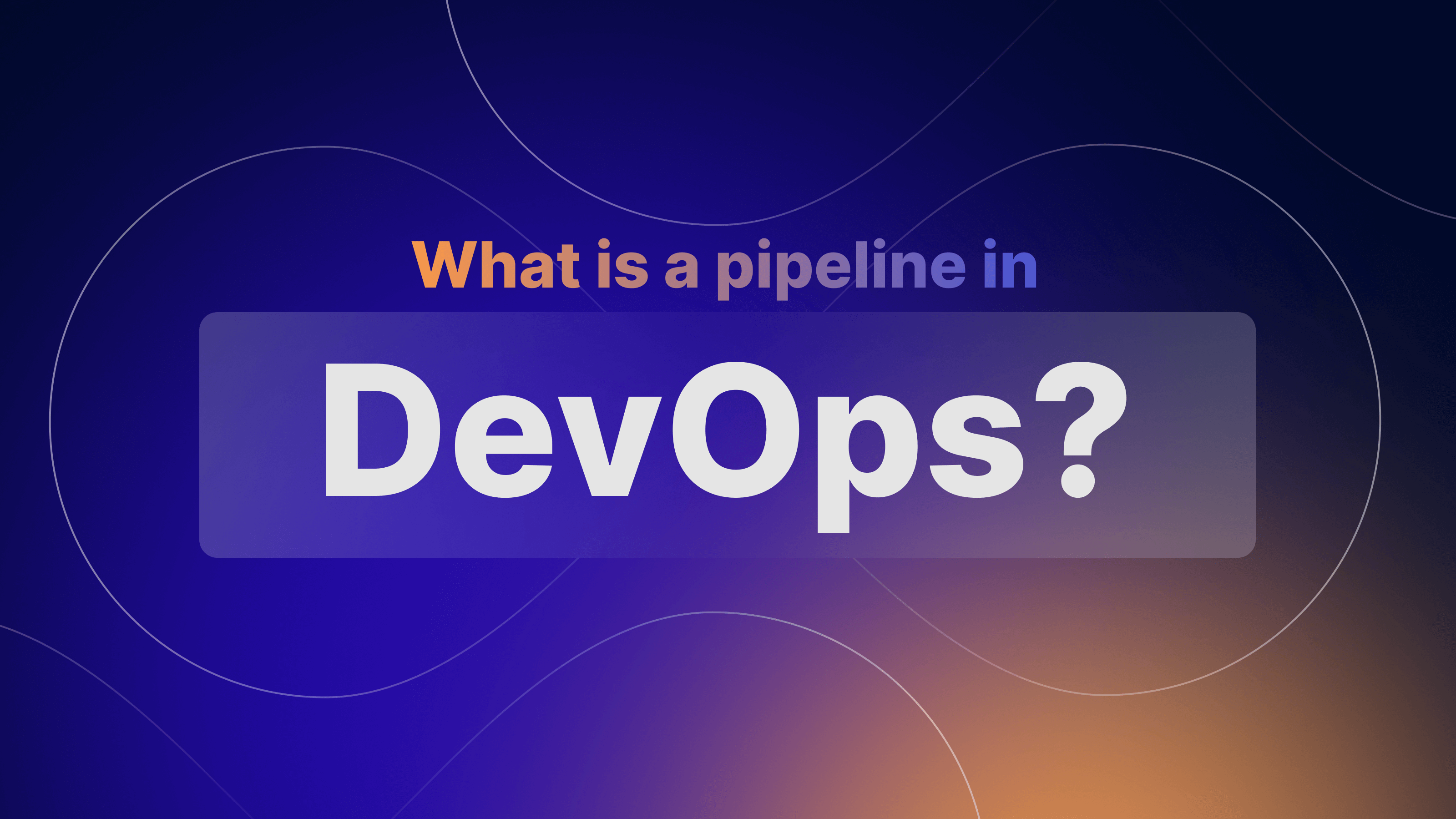 What is Pipeline in DevOps?
‍

A set of tools and automated procedures used by the software engineering team to compile, develop, and deliver code is known as a DevOps pipeline. Companies can quickly create, test, and deliver new code continuously by creating an efficient DevOps pipeline. Automating the software delivery process, which eliminates the need for human adjustments at each pipeline stage, is one of the main goals of a DevOps pipeline. Deployments are frequently delayed by manual labor since it takes time and raises the possibility of human mistakes. The transition from manual to automated modifications reduces errors while enabling developers to produce higher-quality code faster than before.

However, the word “pipeline” may be a little deceptive. A better comparison would be an assembly line in a car plant, as software development is a continuous cycle. A distinct feature of a DevOps pipeline is continuous. This covers continuous operations, continuous feedback, and continuous delivery/deployment.

Organisations strive to offer numerous new features each day. Only a few companies, like Netflix, Amazon, and Facebook, have pulled off this challenging accomplishment. But with a seamless CI/CD process, several daily releases may become a reality.

Teams can create, test, and deliver features without intensive manual labour. Various frameworks, tools, and technologies are employed to achieve this, including Travis CI, Docker, Kubernetes, and LaunchDarkly.
‍

Finding and resolving defects late in the development process is costly and time-consuming. This is especially important when difficulties arise with features that have already been released to production. Also, with pipelines in DevOps, you can test and release code more often, allowing testers to notice and correct errors as soon as they occur. You are effectively risk-mitigating in real time.
‍

A CI/CD pipeline has several benefits, one of which is the ability to roll back changes swiftly. You can instantly revert the program to its former state if any new code modification causes the production application to malfunction. To avoid production downtime, the most recent successful build is often deployed immediately.

Rapid release cycles are becoming the norm, and pipelines in DevOps have hastened this trend. Such a pipeline may assist you in finding issues more quickly, implementing repairs immediately, and improving overall customer happiness with proper design and implementation.
‍

Components of a DevOps pipeline
‍

There are several different approaches and tools that organisations can use to create a customised DevOps pipeline. Common pipeline components facilitate continuous delivery to ensure that code moves seamlessly from one stage to the next, automating the entire process and minimising manual work.
‍

The DevOps pipeline’s next phase, continuous delivery, is an extension of continuous integration. During this phase, updated code is automatically and manually checked, and when the testing is complete, the program is released for production. Continuous delivery aims to give quick updates more regularly. Releasing the source code with minor but major code modifications allows more rapid software delivery and simpler troubleshooting.

Continuous Testing is a type of software testing in which the product is assessed often and early in the Continuous Delivery (CD) process. Throughout the software development lifecycle, continuous testing uses automated tests to ensure teams receive timely feedback and promptly minimise as many risks as possible. Team members may also continually learn about their product and how to improve its quality and dependability.

Contrary to popular belief, there are significant differences between continuous deployment and continuous delivery. The whole release cycle is automated at the Continuous deployment stage, and code updates are sent without manual interaction with the end user. These automatic deployments have the drawback that if flaws are not caught along the route, they will be made public and may lead to the app failing.

‍Continuous Monitoring is an automated procedure that enables DevOps staff to monitor and identify security risks and compliance concerns across every stage of the DevOps pipeline. The procedure may be extended to cover any area of the IT infrastructure in concern outside of DevOps. It enables teams or organisations to monitor, identify, and analyse vital critical indicators in real time and find solutions to challenges.

Continuous feedback is a crucial stage in the DevOps pipeline. It is essential for software releases since it assesses the new updates in light of customer feedback and relays that information to the developer team, who then creates a new action plan.

The initial phase of every project is planning. Create a development plan before you begin coding to guide you and your team through the process. The team is now selecting the technology, programming language, and tools they will employ while gathering input and pertinent data.

DevOps teams can operate in sprints, which are brief windows of time set up for a scrum team to complete a specific job. The entire project is further broken into more manageable, smaller chunks. Sprints allow you to provide more quickly while making it simpler to adjust to changes.

The development team begins working on the software code during the coding stage to produce a tested product. To achieve optimal efficiency, the developers first install code editors, IDEs, and other tools. They also adhere to a set of coding standards to guarantee a consistent coding pattern. Given that it’s where the real project is generated, coding is perhaps the step that takes the longest and contributes the most. Developers will probably return to the coding stage in the latter phases in response to testing and altering requirements.

Before moving on to the next level of the DevOps pipeline, the team reviews the code for faults during the build stage. A pull request (PR), a request to incorporate the developer’s work into the repository, is the first step in sharing the code. Another developer analyses the modifications and approves if there are no problems before merging the code.

By submitting a pull request, you can also automate the process of building the codebase and running tests to find regressions — software bugs that occur when new code interferes with an already-existing functionality.
‍

Your code is then deployed into a staging environment, which is almost an exact duplicate of the production environment, once the build step is finished in order to do additional testing. Here, the testers execute various automated and human tests to confirm the code’s integrity. Security scans are the major automated tests for infrastructure modifications and compliances. In contrast, manual testing, such as user acceptance tests (UAT), involves testers interacting with the application in the same way that users would in order to identify problems and fix them before the code is put into production.
‍

The operational teams receive the software code after the testing phase. The code build will either be automatically or manually pushed onto the server, depending on the organisation’s maturity level with regard to DevOps. The developers may disable new user features until they are ready for use.
‍

Deployment is the step at which we deploy the code built into the production environment, and the client or end-user may utilise the new features. By using the blue-green deployment approach, the procedure may be smooth and interruption-free.

During a blue-green deployment, two identical production environments are running side by side, one of which is hosting the outdated version of the program while the other is hosting the current one. If there are any problems, the developers may easily roll back to the earlier version and address the problem without interfering with the service.
‍

The operations team is responsible for ensuring that everything is operating well now that the software release is live in the production environment. The team frequently uses automation technologies to keep the project running smoothly. To enhance the service, they also elicit customer input.
‍

Monitoring is the final stage in the DevOps process. The operations team gathers information from a variety of sources, including logs, analytics, monitoring systems, and customer feedback, in order to identify any problems or gaps.
‍
‍

The first step for businesses just beginning to establish a DevOps pipeline is to select a CI/CD tool. Each business has different needs and demands; therefore, not every device will be appropriate in every circumstance. Even though there are several CI/CD solutions available, Jenkins is one of the most popular ones. Jenkins can be easily tailored to function effectively for a wide range of applications thanks to the hundreds of community-contributed plugins and tools it offers.
‍

Testing your code comes next when it is operational in the source control management system. You may identify and stop faults and mistakes from being implemented into the production environment by running tests from the very beginning. One of the most well-liked tools for the building is Jenkins or Travis-CI. Travis-CI is free but only for open-source projects, whereas Jenkins is open-source and free. Install Jenkins on a server, then connect it to your GitHub repository to get started. Set up the solution such that tests are performed every time the code is updated, compiled, and a build is made. If there are any problems during the construction process, Jenkins alerts the user.

It’s time to test the code after it has been set up on the build server! Developers conduct automated tests throughout the testing phase to make sure that only error-free code moves on to the deployment step.
TestComplete is a wonderful choice to begin running tests. It has a Jenkins plugin that allows you to run tests in a Jenkins Pipeline project with extra capabilities like saving the test history and making it possible for you to view the results straight from Jenkins

Deploying the code to production, which necessitates setting up server infrastructure, is the last step in the DevOps process. Installing a web server like Apache or Nginx, for instance, is necessary when installing a web application. You will deploy the program on a virtual machine if it operates on the cloud. An app can be installed on the server manually or automatically. There are benefits and drawbacks to each.

The DevOps pipeline is an eight-stage process that integrates the responsibilities of the Development and Operations teams at various points in a project’s lifecycle. One of the primary purposes of a pipeline is to keep the software development process organised and focused. Plan, code, build, and test is the steps in the development phase. Release, deployment, operating, and monitoring are the steps in the operations phase. A DevOps pipeline’s output is a group of variables with assigned values that transfer data and maintain project and user states along the pipeline. The essential components, tools, and procedures for setting up a DevOps pipeline have all been addressed.