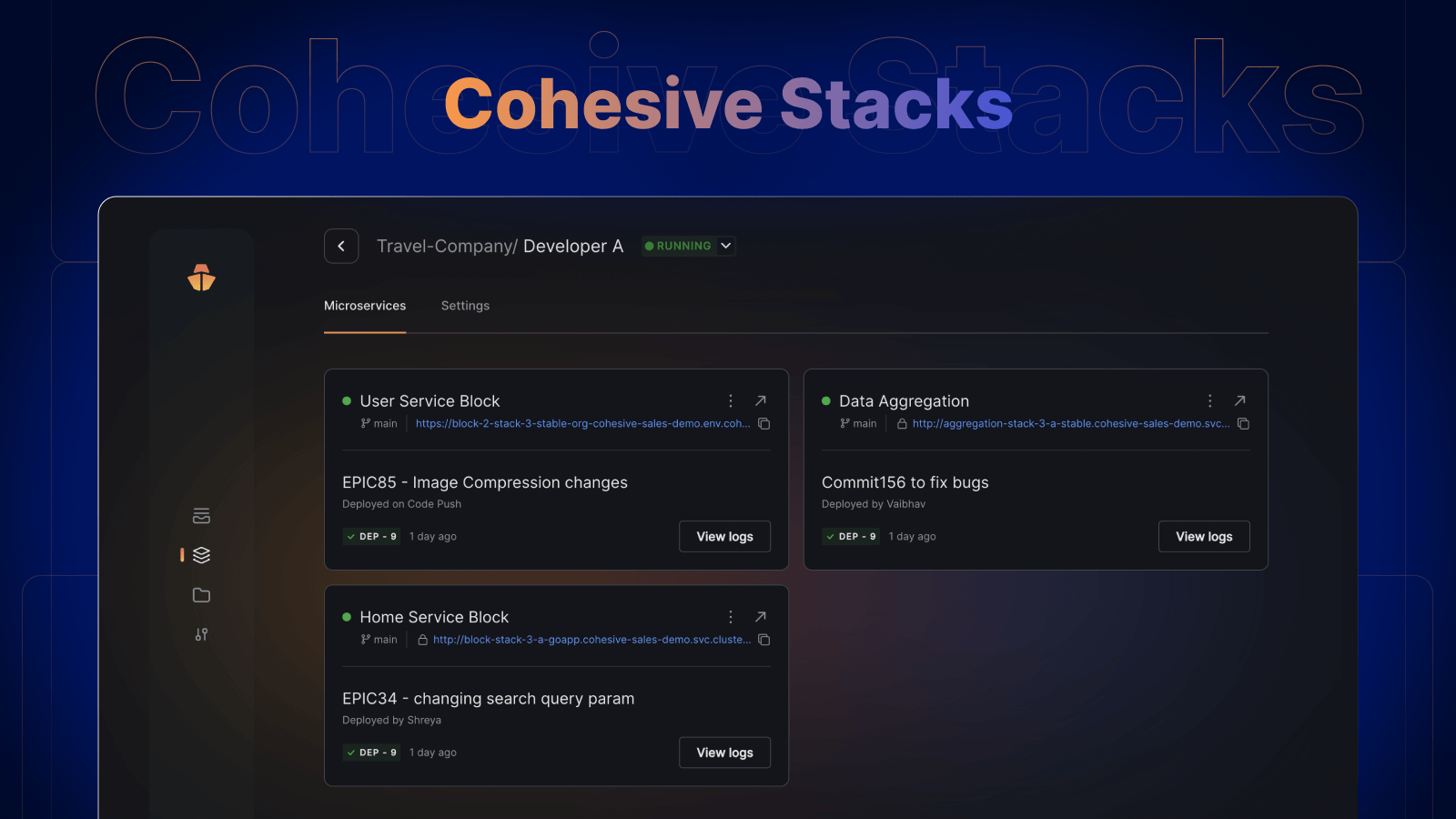 How did we get here?

Over the course of building Cohesive in the last 4 months, we got the opportunity to speak with multiple organisations - from small startups to large enterprises. One common pattern we observed is that there is a pivotal moment in any organisation’s history where the current infrastructure setup starts deteriorating developer velocity, like:

A 2020 report from McKinsey shows that companies with higher developer velocity outperform lower ones by five times when it comes to market performance (Revenue CAGR).

This is where Cohesive comes in. We help you focus on innovation by eliminating the hurdles involved in managing, controlling, and keeping your developer environments in sync with the latest changes. Industry reports from 2019 point out that developers spend only half a day or less writing code, thereby hampering their ability to innovate rapidly. Our mission is to give this time back to developers so they can focus on innovation rather than figuring out configurations.

Today, we are pushing our platform even further so it can cater to extremely complex microservices architectures. We are launching the ability to do end to end microservices testing within developer and staging environments.

Stacks helps templatize complex dependencies that microservices in your system have amongst themselves and enables you to provision and configure the entire infrastructure through a single click. To help you understand the complex problems that Stacks can solve, we are going to showcase how Stacks works with an example. We opted to use Airbnb's latest microservices architecture (SOA v2) as a reference to help you digest how Stacks can help build and deploy complex developer environments in less than a minute.

(Before we step through the rest of the blog, we wish to give credits to Jessica Tai at Airbnb for sharing intricate details of Airbnb's architecture.)

The Airbnb Architecture (2016 to Present)

By 2020, Airbnb's engineering team grew to 2000+ engineers compared to 500+ in 2016, this led to reshaping their microservices architecture to a macro + micro-services architecture. This helped in standardization of service to service calls, low fetch latency between services and avoided redundant data requests. Below is a user facing example of the services that gets called both in the old and new architecture whenever a user visits an Airbnb reservation page.

The new SOA v2 architecture (in the right) has three new elements a) Presentation services (red box), it's responsible for aggregating the data from multiple services and then presenting it to user facing apps. b) Data aggregator (green box), it's responsible for the business logic, translates the incoming requests from presentation layer and decides which downstream service to call. c) Service Blocks (black boxes), is simply an abstraction of multiple services with a common dimension that's condensed into one service block.

The migration from v1 to v2 however has led to slow down in build and deploy times for new changes. Let's say if a developer (called Developer A) is working on applying the latest JPEG-XL image compression to all host and guest images that appear on reservations page shown above (iPhone Screenshot). They would test the changes on a staging environment that's shared with Home Service team. Everything is good as long no one makes new changes to the staging environment.

What if both developers had a way to provision an isolated microservices environment that stacked all services they care about one over the other? Cohesive stacks does just that. The Platform engineering team at Airbnb can simply define what the developer stack should look like for each team and templatize them as a Cohesive Stack. Airbnb developers can simply click a button and launch an isolated environment OR simply push their code and get a preview link to their own isolated environment.

Here are the features that Stacks offer today

We are barely scratching the surface on what we can do to deliver a great developer experience, Cohesive Stacks is just the first step.

If you are currently looking for an end to end microservices testing solution, then Cohesive Stacks is for you. Join the waitlist below for early access to Cohesive.