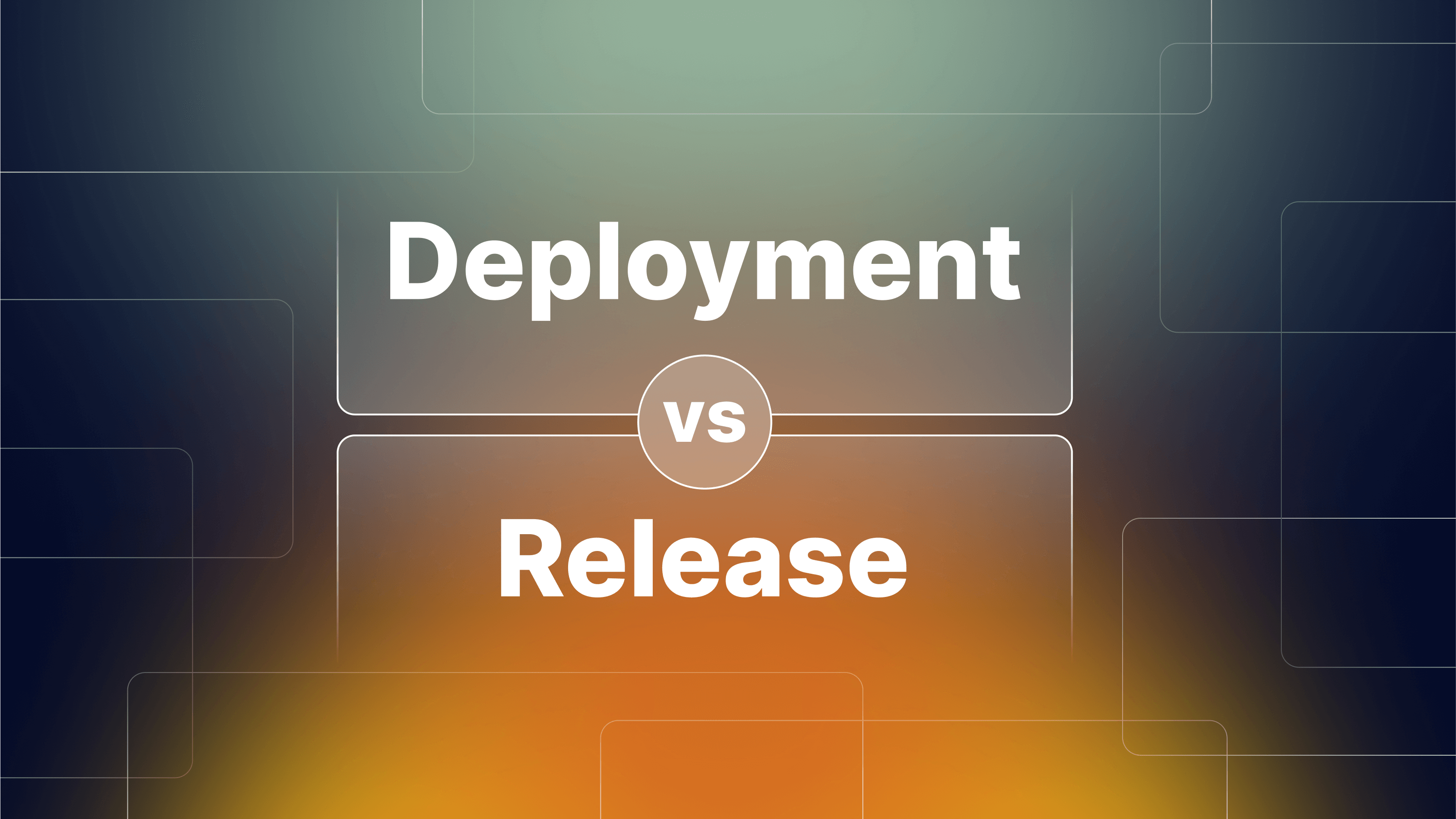 What is the difference between deployment and release?

Though co-related and often go hand-in-hand, deployment and release are different concepts.

In deployment, the software is moved from one controlled environment to another. Releases, on the other hand, consist of several modifications that users might encounter.

This article will explore the differences between Deployment and Release and some best practices concerning both concepts.

Before diving deep into the differences, first, let us explore Deployment and Release individually.

Deployment refers to the movement of builds from one environment to another. During the deployment process, the current and the target environments are controlled.

Some deployment activities environments are given below:

The deployment process marks the conclusion of the Software Development Lifecycle (SDLC).

Now, we will be exploring a little bit about a software release.

Release management starts as soon as the software changes are accepted. Planning, creating, and testing releases for user acceptance come next. Releases are then installed in the intended environments.

To prevent issues with upcoming releases, software releases need to be appropriately managed to avoid problems with forthcoming releases. The ultimate aim of software releases is to have a version superior to previous versions. Before the release builds, packages and plans are sent for testing; release management requires substantial planning.

Activities and resources involved in release planning include:

Since we have discussed release and deployment individually, we must dive into the differences involving both.

The business rationale is the primary difference between this deployment and release. Given the various settings applied, deployment doesn't always imply that users have access to functionality. Some businesses will roll out the software simultaneously as production deployments.

To understand this better and more elaborately, let us compare all the key points involving release and deployment.

Since we have discussed the differences, it is time for us to explore the best practices to improve release and deployment efficiency.

Organisations aiming for improved software releases might benefit from continuous integration and delivery techniques. A CI/CD pipeline aids in the automated release distribution and continuous feedback integration for a quicker time to market.

To provide a seamless software experience, Tesla merged CI/CD, DevOps, and automation. Tesla's software is integrated into its automobiles, enabling programmers to directly deploy updates into live situations on the moving vehicles.

At Tesla, software developers had to coordinate quarterly software releases and significant component updates. So they combined DevOps and CI/CD to produce a dependable delivery system.

2. Create KPIs to keep your team inspired and focused

KPIs can be anything from a particular mistake rate to the number of downloads. It can be motivating for developers to see their new features produce quantifiable returns for the company.

3. Take advantage of the DevOps culture for better software releases

Consider software release management as an illustration. We can use the DevOps culture to build a unified release strategy for software. Faster resolution time resulting in more frequent releases is one of the numerous advantages of DevOps.

For instance, the top German telecommunications service provider Deutsche Telecom AG was dealing with the problem of longer response times. They automated more than 400 tasks using the "gain and share" DevOps paradigm. They used 3000 bots for robotic process automation, which resulted in a 20% increase in customer satisfaction.

A successful release deployment depends on the effective and efficient usage of staging and test environments. The complexity of administering these environments has grown rapidly due to the growing number of apps, release velocity and the application infrastructure stack complexity. Releases might be delayed and deployed at a higher cost due to environment contention or a lack of test environment availability.

Using productivity tools like Excel or Word is ineffective in large test environments. All the production and test environments in your release lifecycle must be able to be tracked, managed, scheduled, and controlled by a procedure you can put into place. Reduced cycle times can be achieved by streamlining the process with automated and self-service environmental provisioning.

We can get a unified test management schedule from a calendar-style view, which gives you knowledge and visibility into what and who is planned for which set of environments. The deployments, scheduled maintenance, and release windows for every environment should all be visible in the scheduling view. Management can simply and effectively coordinate, schedule, and plan preproduction environments to support the release lifecycle using dashboards and reporting based on environmental indicators.

Every time the environment changes, stakeholders should be notified automatically, as well as when their modifications have taken effect. The deployment and release lifecycles require environment management to be an essential component. It guarantees that the proper team is in the appropriate setting at the appropriate moment.

5. Include feature flags to reduce risks

We might run a risk of causing a significant outage or any other service disruption when you launch new software to a sizeable user base all at once. On the other side, we can test new features on a portion of your users rather than all of them by using feature flags to launch.

By gradually introducing customers to new features, we may reduce the blast radius of problems, glitches, and failures as well as gain better insights earlier.

6. For greater flexibility, releases should be containerised

Process isolation through containerisation enables complexity to be reduced in many situations. Containerisation is a great way to increase release and deployment efficiency; there is no doubt.

For instance, we can containerise each release to use fewer binaries if we wish to release our software package across several platforms. The best aspect is that owe can terminate each container since the operation is over.

Starting with a consistent release methodology, the software may be delivered securely and rapidly. By doing this, we can save time and let our team concentrate on high-level work rather than developing workflows from start.

We should design a personalised, standard release workflow template with Feature Workflow that includes flag triggers, approval processes, and deadlines. Assuring that release activities are consistent across all of our teams, we may then save and distribute that template throughout our whole organization.

Version control and automated code deployments are two of the best practices that high-performing organisations use. We may simply roll back to a known state, swiftly deploy a new application, and identify errors by using version control as our sole source of truth. Version control should be applied to the infrastructure and configuration code needed to run and support the application.

Furthermore, every one of these release components needs to be stored in a version-controlled secure release repository. The release repository makes sure that components that are deployed are exact replicas of those that were tested in preproduction settings. Without the repository, artifacts would need to be retrieved from network shares or another system, which would increase the chance of error and security threats.

Now that we have discussed software release and deployment individually and then dived into the differences between these two concepts. You can now implement the  eight best practices to improve deployment and release efficiency in the software development lifecycle (SDLC).